As the U.S.-China tech war rages on, the electronics industry braces for impact The growing rift between the United States and China threatens to slow technology innovation by limiting collaboration opportunities between the world's entrepreneurs and inventors.

In 1965, Intel co-founder Gordon Moore stated that the number of transistors on a single computer chip would steadily double every two years. This would, in turn, increase that processing power for computers, as new technology developed exponentially instead of incrementally. And for the past 50 decades, his prediction – known as "Moore's law" – has held up. But now that transistors are approaching the size of an atom, maintaining that pace is becoming an increasingly less feasible – and more expensive – option for chip manufacturers.

Semiconductor manufacturers create the computer chips that power today's growing multitude of electronic devices – from coffee makers to self-driving cars, and everything in between. The industry, therefore, plays a crucial and increasingly embedded role in the global economy. But chip manufacturers are now facing the highest levels of geopolitical competition and risk they have seen in decades, as the United States threatens to limit its connectivity with China (and its suppliers) amid the two countries' ongoing trade war.

Within this new reality, semiconductor companies will have to focus on designing more specialized chips to process algorithms for hyper-specific applications, such as artificial intelligence. Meanwhile, the United States and China, which are the two most important markets for electronics, are in the midst of a heated war over emerging technology – threatening to fragment the entire industry and the greater tech sector it operates within.

Moore's Law Is No More

Over the years, semiconductor manufacturers have maintained Moore's law by placing transistors at higher and higher densities on silicon chips through a method called "process technology," which is measured by how tiny the transistor is via nanometers (nm). Today, Taiwan Semiconductor Manufacturing Co. (TSMC), Samsung, Intel and GlobalFoundries remain at the forefront of developing cutting-edge semiconductors as the only four companies actively developing process technology below 10 nm. But in April, TSMC is poised to again break the barrier by beginning production for chips using its 5 nm process technology – many of which are reportedly destined for the 2020 version of Apple’s iPhone.

But pushing the limits of process technology is becoming more expensive. The price for designing and building chips is likely now increasing faster than the return, especially as big markets (such as smartphones) continue to saturate as consumers upgrade their devices less frequently. And the cost of maintaining Moore's law is only going to continue to increase as the process technology used gets closer to the size of a single atom (or roughly 0.2 nm).

In addition, process technology has so far largely been focused on packing transistors more densely in just two dimensions. But in the future, more creative technologies will be able to build chips with three dimensions using different materials. And while this will likely enable semiconductor manufacturers to continue cramming more transistor nodes onto a tiny area, the complexity (and thereby, cost) of doing so will also rise.

As a result, manufacturers are now facing serious questions in the boardroom as to whether focusing on maintaining Moore's law is worth it. And for an increasing number, it may not be – as evidenced by Intel delaying the launch of its 10 nm process technology by two years until the end of 2019. 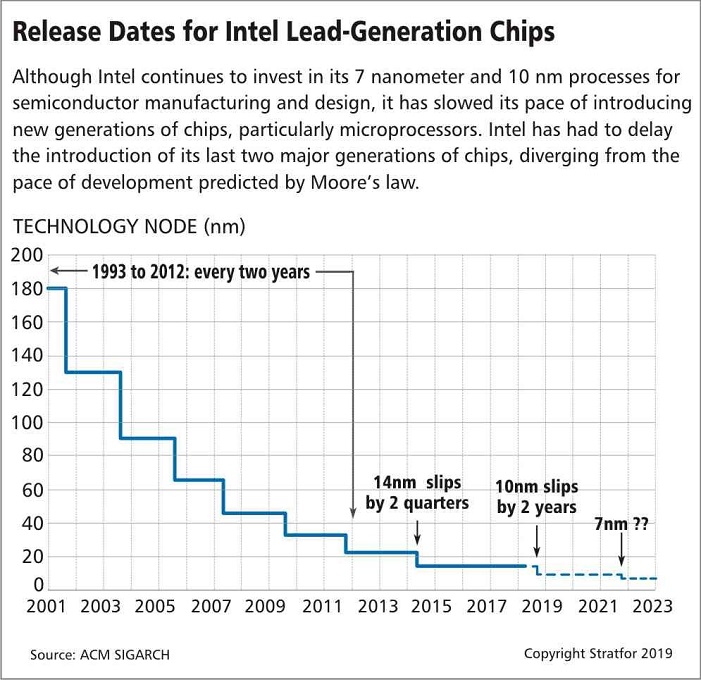 A New Era of Specialization

While semiconductor manufacturers grapple with this seismic shift away from Moore's law, the evolution of the electronics industry has also provided new growth opportunities by increasing the demand for more specialized chips. Historically, the industry has been concentrated on producing computer chips that could be used for dozens of purposes, such as processing units for home computers, servers, smartphones, laptops and tablets. These chips are related to some degree (such as needing storage in addition to the processing unit) to serve similar generalized functions.

But today, many new applications for semiconductors have different and more nuanced requirements. As more and more devices become connected with the "internet of things," for example, processors that can support sensors for devices to communicate with each other will be increasingly in-demand – especially with the coming age of autonomous (or self-driving) vehicles. 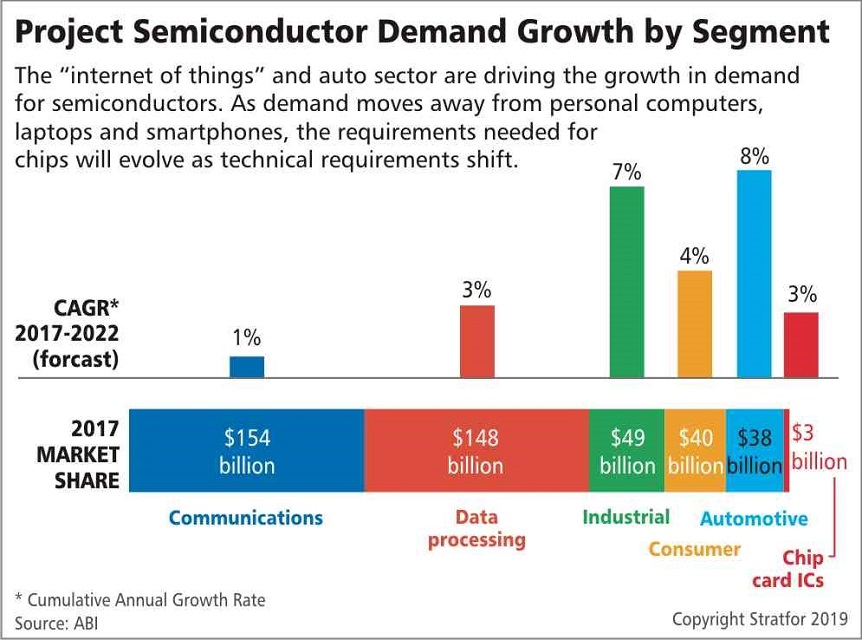 Nowadays, requirements are even varied within related areas of the technology. All devices that use artificial intelligence (AI) already require a particular kind of computing power that can process massive amounts of data simultaneously. But on top of that, the chip specifications for facial recognition, speech recognition and automated driving applications are each profoundly different. 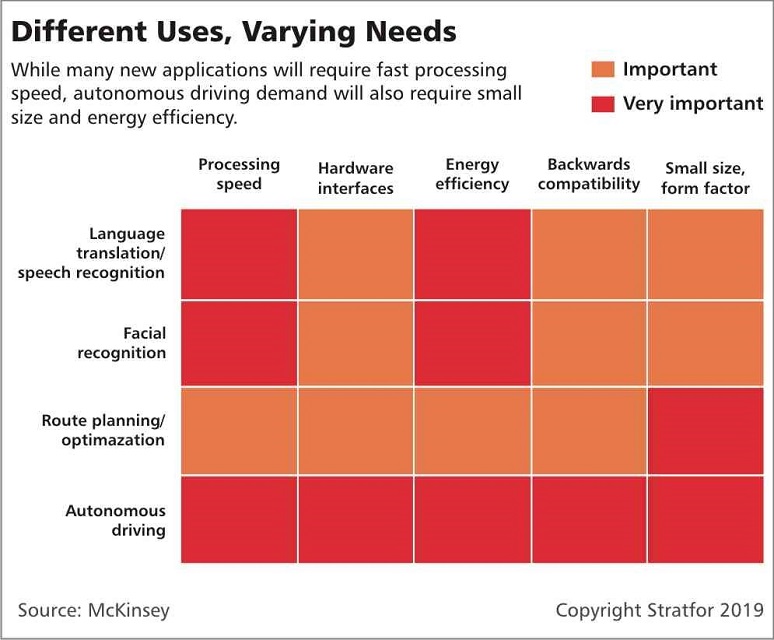 As a result, the demand for more specialized semiconductors will continue to increase, as will investments geared toward ensuring production facilities can fulfill these different sets of chip requirements (such as design and fabrication equipment).

The growing need for differentiated use cases will also lead to a spike in demand for older generations of technology. GlobalFoundries, for instance, announced last year that it was halting all development of its 7 nm process technology to instead focus on its more in-demand and cost-efficient 12 nm and 14 nm processes. In some ways, this can provide companies with the opportunity to catch up or specialize in niche areas. But it also means that the market for many of the older process technologies will likely remain saturated, as more companies opt to invest in more profitable manufacturing and design capabilities. 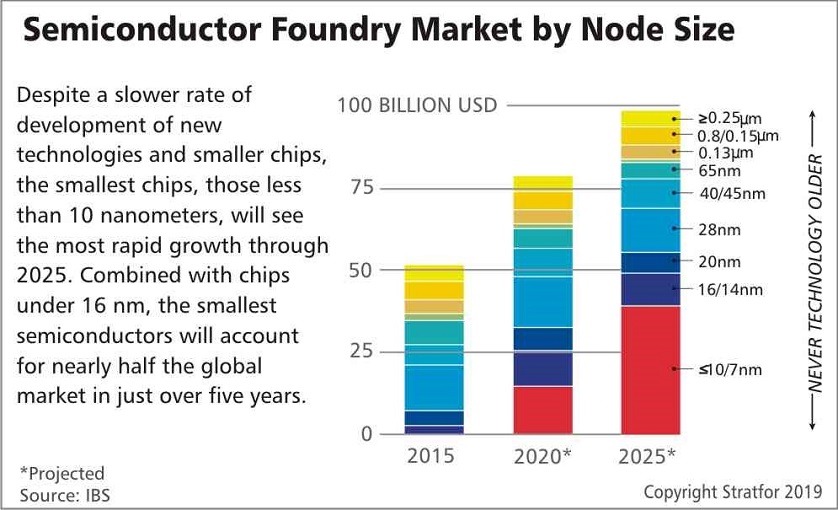 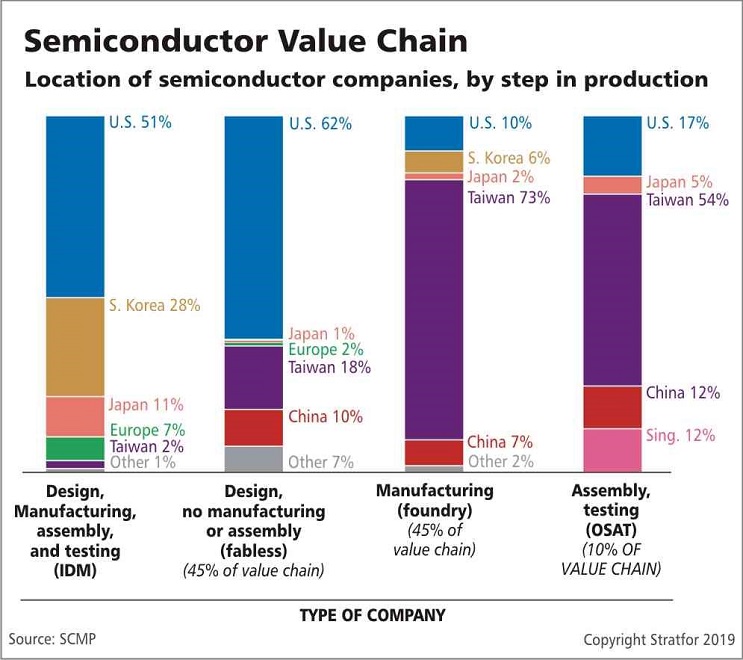 U.S.-based Apple, for example, may design the chips for its iPhone in Silicon Valley. But the assembly of the chip may occur in Taiwan with the final packaging done in Malaysia – all while using materials sourced from Japan – before ultimately being sent back to the United States and re-exported to China to put the actual chip in the device.

The result is an industry deeply connected to global supply chains. This also means that despite remaining fierce competitors, semiconductor companies are no longer operating in a zero-sum game and are now, in many ways, mutually dependent on one another.

But the industry's global interconnectedness and structure also make it vulnerable to shifts in power dynamics – namely, China's recent emergence, which has historically lagged behind the United States, Taiwan and South Korea when it comes to chip development.

When looking at the top companies dominating manufacturing semiconductors in China, the biggest players are often international companies with domestic subsidies. South Korea’s SK Hynix and Samsung are the two largest by revenue, followed closely by the United States' Intel and Taiwan's TSMC. But the two Chinese companies in the top six – Huahong Group and SMIC – are generations behind leading non-Chinese companies. And while Chinese tech giant Huawei has become a major player in designing certain chips, those powering the company's latest generation of high-end smartphones were, in fact, built by TSMC. 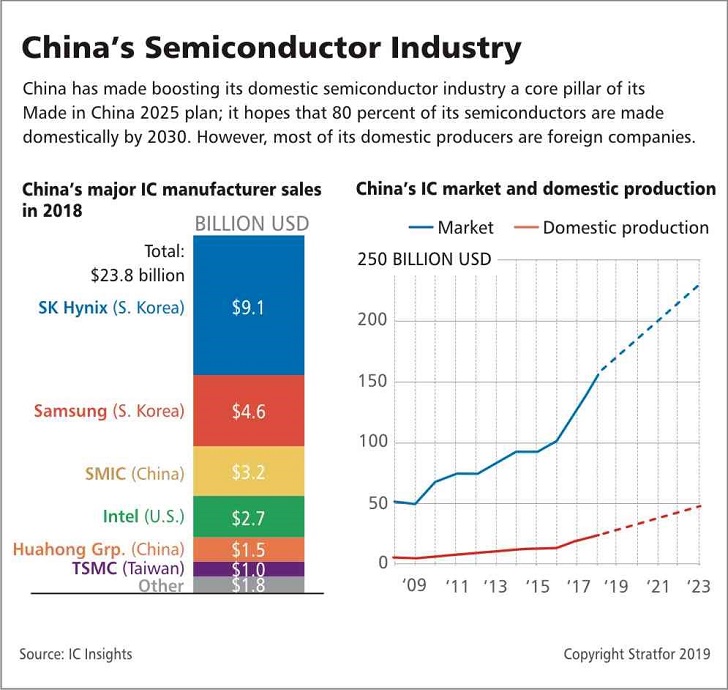 To change this trajectory, Beijing has made the development of its own semiconductor sector a core part of its Made in China 2025 plan. In doing so, Beijing hopes to bolster its share of the electronics market, while having domestic production reach 80 percent of domestic demand for chips to power the myriad of smartphones, computers and other devices its 1.4 billion people use on a daily basis.

Caught in the Crossfire

But China's attempts to ramp up its in-house manufacturing and design capabilities has ruffled the feathers of the United States, which has made it its mission to counter Beijing's rise in such areas of emerging technology – leaving the tech companies (and their bottom lines) caught in the middle.

Amid Washington and Beijing's heated trade competition, tech companies have pushed for the United States to demand more intellectual property and technology theft concessions from China. But they have remained wary of Washington's demands for Beijing to reduce its trade deficit by buying more U.S. goods, including semiconductors – fearing that doing so would play into China's techno-nationalist strategy.

However, in the short-term, U.S. tech companies stand the most to lose from the concessions each side has put forth. First, there are concerns that China's offers to buy more semiconductors directly from the United States will hurt U.S. firms' development model of outsourcing elsewhere in Asia for testing – all while prioritizing Chinese semiconductor manufacturers gaining access to contracts for their local market when it comes to importing designs from companies such as Qualcomm.

The United States is also in the process of placing export controls on emerging tech to combat China's access to such technologies. Controls on deemed exports could effectively include banning even discussion on research and development strategies. And depending on how wide the net is cast on what technologies and ideas are involved, this could be particularly problematic for the growing number of startups that are designing or building niche chips to meet the growing demand for specialization – considering export controls could completely bar them from China's behemoth sales market.

But on a global scale, what is perhaps most worrisome about increasingly hostile U.S.-China relations is the potential for a more permanent fracturing of the tech sector. Today, the technology industry's high degree of globalization, and seamless transfer of patents and services overseas, is the result of a nearly 30-year integration process. And within that time, it has become a largely well-oiled machine.

But now, the growing rift between the East and West is threatening to unwind and unravel this complex and integrated system by forcing companies to pick a side – limiting cross-country collaboration opportunities between the world's tech entrepreneurs and inventors in the process.

The upshot is the increased risk of a global slowdown – or at least, a reduced acceleration – of technology innovation. This, of course, is not a forgone conclusion. But it's one that's becoming all the more likely as China and the United States continue to raise the stakes in their trade war – raising the level of geopolitical risk to new heights at a time when the semiconductor industry is already undergoing a tectonic transition in its own right.

“As the U.S.-China Tech War Rages on, the Electronics Industry Braces for Impact” is republished under content confederation between Financial Nigeria and Stratfor.